Adrenaline is an interesting thing. I like it to a certain extent. It’s gotten me off a mountain top with bad weather closing in. It’s kept me from crashing my car in icy conditions. And it’s probably cut a few years off my life thanks to its connection with El Clásico. All things are give and take, y’all. El Clásico takes your sanity, social abilities, and hairline, but it gives you more waistline, mass hysteria, and cardiac arrest. All things are give and take.

What you witness when you witness a match between the two great sides of Spain is far more than the 90 minutes of game time. Besides the obvious preparation by the team itself, there’s the reams of idiotic drivel “sportswriters” and “journalists” dish out at a stupendous rate, the Madrid-based statisticians pointing out the obvious nature of Madrid’s superiority and the one-upmanship from Catalunya saying “nuh-uh, poopypants, our statisticians butter their bread on the correct side”, and now even the psychologists claiming The Real Thongnaldo is allergic to Barça while Messi is the scourge of Madrid.

Basically, if this goes on for another 10-15 minutes, we’re going to see this splashed across all the newspapers in the world: 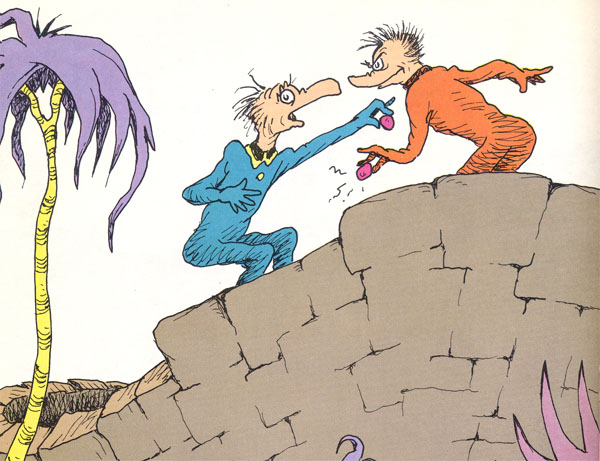 And you thought it was the Soviets that would pull the trigger. Turns out it’s me, incapable of writing another preview about Llourinho or Dive Maria.

But here we are, talking about both: among the list of casualties in white for this match is Angel di Maria, a man whose propensity for getting sudden injuries right as he’s totally owned by Eric Abidal are known worldwide (we chanted “broken ankles” at our bar for a solid minute, maybe more). Marca declared dM out of the contest 100% for sure definitely not playing. Moments later Mourinho declared him not quite fit, but in the squad and hopefully playing a pivotal role in the match. Being the glorious human being that I am, I hope he’s fit and capable of  breaking his ankles yet again in front of Rey Abi. Remember, The French Greyhound doesn’t even need to be on his feet to be so cool Samuel L. Jackson takes lessons from him. O-freakin’-lé. [UPDATE: It’s been brought to my attention that the above mentioned broken ankles were by Pique, not Abidal. Does that make Abidal less awesome? Nope. It makes me thank Shakira for teaching Gerard these sexy moves. Thanks to reader Srini for the info and link.]

Yet the larger point is that Mourinho is playing the game that we’ve all created for him to play. Can’t really blame him for “hiding his cards” as they’re saying: there’s so much pressure on this that if he falters, if Barça comes out the victors, it could wreck RM’s season. I say could, of course, because the Liga is by no means lost if they’re out of the Copa del Rey and the Champions League is just about to get going again. And yet it seems that the pressure is all on Madrid this time around. The burden of expectation and the fear of failure is rampant.

Cules can stand anywhere on earth and feel free to sing the hymn and then, kindly, with a pat on the shoulder of their beet-red madridista neighbor, point out that Barça can still win when they spot los merengues a goal. The peels of laughter that follow are the gorgeous bells of a cathedral for me and a dark dirge to those who have outspent, outspoken, and outfought the Catalans only to find themselves at the bottom looking up.

Naturally nothing is written in stone and the team has to play lights out to win. That’s the odd thing: against this Madrid team, they’re on point. They’re capable. They don’t go to sleep. It’s as if Mourinho keeping his mouth shut would maybe allow him to catch Barça napping, but the turgid waters are so mucky with reporters making up their own story lines that it’s basically impossible not to say something, even if you say nothing at all. Silence is no kind of “no comment”–and that’s not particularly fair, but Guardiola has mastered it: just answer the roundabout way, take the high road, feed them what they want and nothing more.

So, to the Madrid injury woes: Carvalho and Khedira are out (actually, 100% out) while Arbeloa is suspended. Pepe has been struggling with some fitness questions and di Maria appears “tocado” if still capable of playing. Mourinho had this to say about his options (English below):

Sure, that’s all true, especially the part of about him not bothering to show up, but it’s said with an air of disgust that only further incites the already insane mob. And it heaps pressure on the players to make right by their manager’s decisions, even if they’re wrong or if Barça is simply better on the night. Until they beat Barça again (over these 2 legs or in a one-off match), Madrid will be in this vortex of crazy that they can’t seem to get out of or get enough of. Further, what about Callejon? Do you start him, Varane, or, as Marca somewhat absurdly suggested, 20-year old Castilla player Dani Carvajal. That would go over well, I’m sure.

And while there are serious injury problems on the front line (Villa, Ibi, Pedro), the starting lineup that won 1-3 the last time Barça went to the Bernabeu is completely available. None of the subs that were used (Keita, Villa, and Pedro), but at least the first 11 could play. Personally, that’s exactly what should happen, with the exception of the goalie:

That’s a solid lineup, no matter who is thrown at them, though the subs may leave a little to be desired in terms of versatility and experience. Thiago, Adriano, and Mascherano are the major names there, but beyond that are a series of little ones that, while talented and capable, are perhaps not up to the challenge of a full on clasico quite just yet. Cuenca, perhaps, but he was more worthless than I was on Sunday and I was pretty much just a hunk of alcohol-sodden flesh (except when I was in the bathroom for Alexis’ goal, in which case I was simply missing in action, but that was sort of Cuenca’s thing too).

So here we are. It’s time again. Do they play a trivote, do they hunker down for the 0-0 and go for the 1-1 away? Who cares, we play our game, we do our thing, and come what may, it’s el clásico time.

Official Prediction: 1-1. A tight affair to be decided at the lovely Camp Nou in a week. Goal by Messi because, well, he’s Messi.

Let’s make this a mature ending: