On the bus ride home today, I thought about a lot of things. A lot of life-altering things. Because with all the route changes and random construction on important streets, I have a lot of time to deliberate the most pressing questions in life. Like, how is it that I can talk about the weather with total strangers and it’s totally not awkward?  Would people laugh at me if I said our train only had five stops? Why is it that when someone knocks into you, you’re the one who has to apologize? Who is that man in the white van everyone’s warning me about? Why are there more Canadians on Boston than Vancouver? How much wood could a woodchuck chuck if a woodchuck could chuck wood?

All very, very important questions, but you know what the biggest one is? How did Queca die?

Yes, it’s true. I wanted to give people some time to mourn but it can be avoided no longer.

Yesterday, Queca passed away. Puyol dropped the Llorente sized bomb on us via Twitter.

F-for those of you w-who are unaware, Queca was…  Q-queca w-was… No! I can do this. I can do this. I promised Puyi I could. Do. This. Queca was Puyol’s best friend. They went through everything together, from running away from the barber in his heyday to the Clasico Apocolypse and everything in between. He was a true cule. A member of the Barca, and therefore BFB, family.

Carles had this to say:

“Today [Monday] is a sad day for me, Queca has died. He was old and couldn’t deal with the fame. Do not worry about me! I’m recovering well. In fact, I was allowed to bench press today. What a workout!! I sweated so much that it even came out of my eyes, especially whenever I thought of Queca!”

Of course, that wasn’t all. Less than 24 hours after Queca’s death, yet another bomb. This time, Messi sized.

“I now have another beloved. Let me introduce you to Puyi!

IT DOESN’T FILL THE VOID! 😥

Queca, you were the best pet sheep ever. 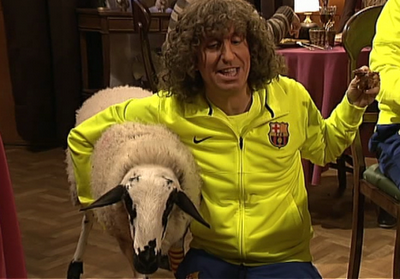