You just know this’ll be good.

This was brought to our attention by reader Miguel and I feel it deserves a post of its own. I’m not saying this just because he’s my favourite player. This has Messi AND Ray-Ray Hudson, featuring Joaquim Maria Puyal. Greatness.

Whoever you are, The Wizard of Ox, I will be your Dorothy. Yes.

This second video is a very nice reminder. Forget my Adversity post, watch this and enjoy. And you can thank reader Humphrey Bogart for posting it in the comments and a guy called Lenny for making it.

So good. I can’t put how much I love both these videos into words, so I’ll just stop typing about it. I’ll leave you with this quote via barcastuff:

Mascherano: “No matter the opponent, the style isn’t up for discussion. If we have to die, we’ll die our way.”

And this video of Messi’s 50 goals so far by jackmcrobert:

A little blab on Wolfgang Stark (ref for Wednesday’s bloodbath game): We might be in trouble. Before you start saying, “Kari, why the flip are you going off on refs, that’s so not cool”, let me tell you a small story. Normally I’d agree with you, calling out refs is so not cool and Sport/EMD/Marca/AS worthy, but…

It was July 2007 and Argentina U-20 and Chile U-20 were playing in Toronto. Naturally, I was watching this match on TV seeing as Chile were playing really well (they had Vidal and Sanchez playing, as well as a goalkeeper that was awesome–forget his name though) and Argentina was the team I wanted to win the tourney (they had Kun, Zarate, Di(ve) Maria, Piatti and one cute little midget Maxi Moralez). However, two South American teams–ones that have a sort of rivalry at that—clashing in a semi final and you just know gamesmanship will be in abundance. Wolfgang Stark was the ref for this game and to say he handled it badly would be an understatement.

The rest is summed up here and here. A small excerpt:

Following the match Stark and his colleagues were surrounded by livid Chilean players who were restrained by members of the Toronto Police. Stark then had to be escorted off of the pitch and into the dressing room tunnel by police officers for fear that he would be attacked by the crowd and/or Chilean players at the National Soccer Stadium. Chilean players, still angry after losing the match, fought with and were pepper-sprayed by police officers outside of the stadium. The players were temporarily held inside the stadium by the police for several hours and were released without being arrested.

I don’t have a good feeling about him and I am horribly biased against him due to the aforementioned semi-final. (I said that when he was announced to be the ref of the conveniently forgotten first leg against Chelsea in Camp Nou). I don’t usually talk about referees, because in the end, the players are the ones who decide it. I still feel that way, so here’s hoping the ref is a non-issue.

Mourinho doesn’t like him either, apparently, but when has he ever like a referee before a game? Or after? Or during? Or ever?

Also, Busi, I saw you during the Copa final: please don’t revert to Bad!Busi. Stay on the good side, even if it is the Evil Empire. Your father would have wanted the same. (What the heck are you talking about? His father’s still alive, idiot)

A sign to stop the Bad!Busi-ing is when no one comes to your press conferences.

And this is just for shiznits and giggles: 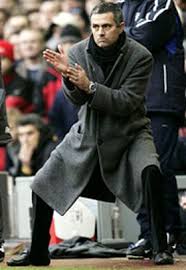 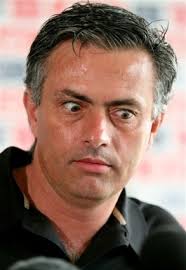