Watch and marvel as one cule valiantly goes and plays the himno in the lair of evil that is the Santiago Bernabeww! Con dos cojones, as some would say. A true cule hero!

If I could find this guy and marry him, I would, but for pesky complications, like me not knowing who he is, the language barrier and something about stalking.

I tip my cap to ya, suh! And Allroundsoccer from whom I embedded the video.

Another video to watch is this one, by… Lebo Akatio.

It reminds me just how aesthetically perfect the last clasico win was. We had beat them 4 times in a row beforehand, before beating them a fifth time 5-0. Asi es perfecto, as Shakira would say.

Too many posts? Welcome to El Clasico Week! We don’t do refunds.

Real Madrid CF has just annouced its latest signing. It is unclear whether or not he will debut against FC Barcelona in the much anticipated El Clasico on Saturday. Senior Liga officials have said they are set to investigate the new signing, as they have felt a strange force emitting from the man as well as a strange craving for cookies. 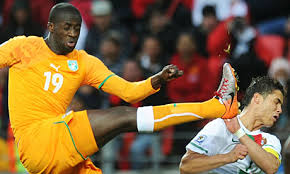 It is unclear what they mean [oh, you know exactly what I mean, mystery reporter -ed]

As a sort of heads up, I’ve begun uploading la manita, mirrored unfortunately. It’s pretty much impossible to upload a Liga video on YT, which is not surprising given the TV money issue. Actually, I’ve just found out they block it even when it’s mirrored. Whoa. In any case, I know it’s annoying, so you don’t have to watch it if you don’t want to. I’ll post it whenever I’m finished (that could be tomorrow or when Espanyol win a trophy not called the Copa Catalunya).

If you don’t want to wait for my slow arse, have no fear! (Just know I could be very offended. I’m not) Ramzi posted the full match, in English, on his/fcbfandrivel’s/otherpeopleI’msorryIonlyknowthosetwo’s website, Football Mood.

[EDIT] This is (unacceptably) late, but a million thank-yous to reader Jose for posting the Darth Vader picture!