I was going to do some horrible play on words with Shakira, but I couldn’t think of anything half-decent. Tar tar sauce, as Spongebob would say.

Shakhtar are considered the Dark Horses of the CL this year, not only because they’re from Eastern Europe, where every team seems dangerous and shrouded in mystery, but because they have upped their game to another level, qualifying for the QF of the CL for the first time in their history. I confess that I don’t know much about this neo-Shakhtar, so I dug around and made a list of players I think we should keep an eye out on.

Dymtro Chygrynskiy (Central Defender): We should all be familiar with this man (unless you are new, or a fan of another team). Nicknamed Txigrinski when he was with us, and Txignasty by this blog, he was sold back to his parent club for 15M. Back at the club where he’s more familiar with, Dima has returned to being the cornerstone of the Shakhtar defense. A towering defender, he also possesses a great positional sense, which can make up for his lack of pace, and an eye for a pass. Added to this, of course, is the fact he spent a season with us and should be more familiar with our forwards, with the exception of Villa. How troublesome.

Jadson (Attacking Midfielder): This guy bothers me, more so than Eduardo and Willian. Forget that he looks stoned in that picture for a second. The 27 year old Brazilian got his first caps for Brazil this international break, and this is most definitely off the back of wonderful performances with Shakhtar. The main creative source along with Douglas Costa, Busi (or Macherano) will have to keep two eyes on this guy. We’ve had trouble with Jadson in the past, and this time will most likely be no different. Fiddlesticks.

Darijo Srna (Right-back): Captain of the Croatian NT, and Shakhtar, Srna has a ton of experience. Normally, “ton of experience” is synonymous with “he’s old and been around for a while, but I don’t really know much else about him, so I say that”, in journalist lingo but Srna is only 28. Having played in many high pressure situations, including England at the Wembley in 2007*, the thought of playing at the Camp Nou won’t intimidate this guy. Currently in his prime, he’s been dominating the right flank this season. An attacking right back, very much in the mold of our Dani Alves, whose judgement on when to attack and when to defend has improved greatly. His technical skills are above average and his crossing isn’t bad either. One of the best players in Europe this season.

Willian (Left-Winger): A Kxevin favourite, the 22 year old Brazilian can also play as an attacking midfielder if needed. A tricky and skillful player, as expected of a Brazilian, his goal against Roma at home proved to be the final nail in the Italians’ coffin. His passing leaves a bit to be desired, and he has a tendency to go for goal when a pass might have been the better option. Still, he’s got gobs of pace and with Dani moving up the pitch, Pique will have to be at his sharpest. 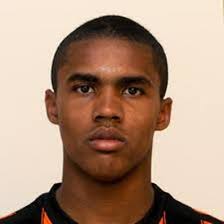 Douglas Costa (Attacking Midfielder/Right winger): Fast. That’s the first thing I thought when I saw this boy–and he is indeed a boy, just 20 years of age. His ball control is inconsistent and he seems too keen to try the spectacular, but if he’s in acres of space, one word: trouble. Shakhtar’s coach Lucescu has put him in a more free role, very much like Messi, this season and he’s been revelling in it. He’s caught the eye of many top clubs after the two legs against Roma, and will look to repeat the sparking performances against us.

I’m no Zonal Marking, and certainly no Euler or Ramzi, but I’ll attempt to give you some tactical insight (pftt). Laugh after you read it. Or pinch yourself that some female not only know the offside rule, but is actually attempting to talk tactics. Ah ha. (Someone forward this to Andy Gray please)

How Lucescu has Shaktar playing this season:

The formation of choice is a 4-2-3-1, with two defensive midfielders and a lone striker. Jadson, Willian, and Douglas Costa form the “3” behind the “1”–Luiz Adriano or Eduardo. They are primarily a counterattacking team, at least from what I’ve seen in Europe (not much, so you can take it with a jug of salt).We all know, however, that formations can be arbitrary and it doesn’t really stay like that.

In possession, Srna pushes up, becoming a winger and one of the two defensive midfielders cover for him. They like to use the flanks, so Willian and Costa will see plenty of the ball. Jadson stays central, acting as a medium between flanks, kinda like Xavi. They have a Barca-like quality in wanting to stretch the defense and are not hasty with the ball. If the opportunity doesn’t present itself, they are happy to pass back to maintain possession.

Zonal Marking has this nice chalkboard of their formation, to give you a visual. This is from their first leg against AS Roma in Rome. I’d recommend you all read it since I feel they’ll adopt the same approach on Wednesday.

In the above, when Srna pushes up, Mykhitaryan would cover for him, leaving Hubschmann as the lone DM. Rat, the more conservative LB, also pushes up to support Willian or act as an outlet pass for Jadson; similar to how Maxwell/Adriano support Villa, or prove an outlet for Xavi.

The main asset Shakhtar has is the speed in which they go from one side of the field to the other. Their link-up play and passes over a short distance will make giving the ball up in the centre of the pitch a definite no-no, and the speed of Wilian and Costa will be a big issue. They are also not afraid to shoot outside of the box, so we should be vigilant in that regard.

Shakhtar without the ball

In defense, and this is most likely the formation we will actually be facing considering this match is in Camp Nou, Shakhtar adopt a 4-4-1-1. The striker stays up top, as well as Jadson, while the wingers Willian and Costa will look to track our full backs. Shakhtar are extremely disciplined and have always been a tough nut to crack.  In our last meeting, we needed an extra time Pedro!! goal to give us the UEFA Supercup win.

And while you’re watching the video, look at how compact the centre of pitch is. There are almost no defenders out wide. We need to have width in this game–it’s going to be crucial. We have a tendency of trying to play through the middle, and it’ll cause us problems if we don’t try and stretch the defense.

Pep has said he didn’t want Shakhtar because they know us too well, and I agree. This will be a tough match, folks. I really hope Pedro!! is fit in time for this game because we’ll really need his hell raising nature.

*I quite like the Croatia NT, especially their coach (or is he the former coach now?) Slaven Bilic. He looks like he’d play the best movie villian ever (James Bond, anyone?) and he’s got cojones. After they (Croatia) beat England away from home, eliminating them from Euro 2008, he then goes post match and tells the country to “wake up” and Croatia were “simply the better team”. I couldn’t find a video with higher quality, but man, it was so awesome.

All I can say is that this man fought H1N1 and kicked its ass. Surgery? Puh-lease.