Today…has been a good day.

A win away against a tough opponent under trying circumstances, a RM loss, and a Ray Ray Hudson shoutout… My life and BFB’s are complete.

If you missed it, during the first half our blog got a shoutout from our favorite commentator Ray Hudson on GOLTV. If you have a fancy DVR thing, rewind to 10:50 and you can hear it. Luckily, reader Miguel has one such fancy thing and has relayed the blog shoutout:

He also said I’m awesome. “Really?!” you ask. No, not really. But it’s still incredible cool! He is seriously and honestly the best commentator in football today. The passion he brings to the game is second to none. If you’re reading this Mr. Hudson, I’m totally sucking up you’re the best! Keep it up! 😀

This blog is only as good as its readers, and we wouldn’t have been so big/popular enough as to get a live TV shout-out if it wasn’t for you guys.  Credit to Isaiah and Tarun (our IT guru who makes this all work behind the scences) for starting this blog and our journalist extraordinare Kxevin, the Keita of the blog Luke, resident genius SoMa, the mysterious Linda, tactics whiz Euler and real-life genius vicsoc for making it better.

–Before our reviewer gets the match up, I’ll give you some post-match comments and stats (all from or via @barcastuff]:

Guardiola: “8 points is a good lead but stranger things have happened in sports. Madrid is a great rival.”

“Interview with RAI? They said they wouldn’t broadcast it, but they forced the journalist to do it. Wasn’t smart of me. There’s nothing new, I’ve recently said the end is nearer than the start. Just repeated that for Italian tv.”

“Messi is fine but he had some troubles and comes from a diabolic journey with his NT. I preferred a good 30 minutes.”

“In the first half, we had the game and they had the chances.”

If you think you’re champion when you have an 8 points lead at 8 games from the end, you can lose the league.”

Pique: “It’s an important step. 8 points is a lot, but it’s not decisive.”

“The team has showed that whoever plays, we can keep the same high level.”

“Goal? Think I controlled it with my chest. It all happened very fast; we should see the replay.”

Thiago: It’s a difficult away game; they’ll play in the CL next season. It’s a complete day for us because the B-team won as well [against Villarreal B].”

“There are still 24 points in play, so you can’t say we’re champions already.”

“Important win at difficult pitch and we extend our lead — perfect day.”

The Stats and Other Interesting Tidbits:

Bask in the glory, muchachos. We haven’t won the Liga yet, but we’ve taken a massive step towards it. As a topic of discussion, what do you think about Valdes and Busi picking up (probably deliberate) yellows? EE’s Ramos and Alonso also did it before, in a much more obvious way.

But in the end, I leave you with this: 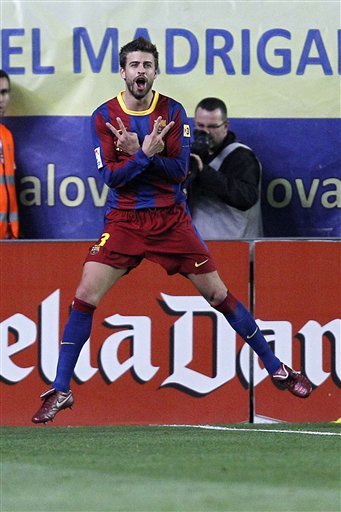 And most definately this: