With the news Qatar Foundation will don/mar our training kits starting tomorrow, here is some nonsense to…cheer you up, maybe?

After training Tuesday and Bojan needs some advice–Ghostface style.

Iniesta: Sure, Bojan! What’s up?

Iniesta: Yeah? Well, what is it, Bojan?

Bojan: I don’t want to shock you, but… [trains gaze on the floor]

Iniesta: Don’t worry about me! I can handle it!

Bojan: Sometimes… I think that, well, that people don’t really take me seriously.

Iniesta: [gasps] No! What made you think that?

Bojan: I went to Toys-R-Us yesterday to buy Messi some legos because I was in the area and he wanted the new Grand Knight Warrior before it sold out and…

Bojan: “You don’t have to be embarrassed! Everyone likes Legos!”  He thinks I’m a kid!  What should I do? 🙁

Iniesta: [thinks] Well… Maybe you have to be a little bit more…assertive.

Iniesta: Yeah! Like, “I’m not going to take no for an answer!” Did you ever have a rebellion phase, Bojan?

Bojan: Rebellion phase? You mean that phase all teenagers go through?

Iniesta: [nods] Yeah! I had one once.

Bojan: R-really? What did you do?

Iniesta: I dunno if I should tell you. It might be a little too much for you to handle right now…

Bojan:  OH MY BOCADILLOS. THAT IS THE CRAZIEST THING I HAVE EVER HEARD.

Iniesta: It’s how I got respect in my La Masia days. [smiles wistfully] Good times…

Bojan: [downcast] I dunno if I could do something like that though…

Iniesta: [clasps Bojan on the shoulder] Don’t worry, I’ll help you! And when I’m done teaching you, people will never treat you the same again!

Pique: Hey, Bojan, you want to go to the arcade later?

*turns around and stalks off*

Pep: [warily] Listen Bojan, I know you want to play against Valencia. I was a player too and I know what you’re going through, but even if it made any sense—which it doesn’t—I can’t sub you in for a defective piece of grass. We’d have 12 players and that would be against the rules.

Bojan: Screw the rules, I have money!

Pep: Actually, if you’re talking about the pay raise you got when you renewed your contract, there are at least four players better paid than you.

Pep: Actually, according to Don Balon, Pique is sexier than you. 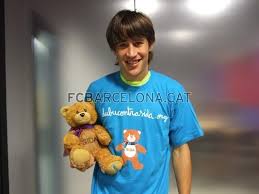 Well, can’t disagree with that.

Bojan: [eyes light up] Does that mean I can play on Saturday Wednesday?!