In the year 2009, Pep’s Barcelona won six trophies in one year.

In 2010, Barcelona ended the season with only one league defeat and almost reached the Champions League final.

In 2011, Barcelona had a very dominant team that won both the league and the Champions League.

On the other side of the land, rivals Real Madrid were building a team full of stars that managed to win the league in 2012. Mourinho’s Real Madrid accumulated 100 points that season.

Tito’s Barcelona won the league in 2013 with the exact same fashion.

Finally, underdogs(if you can really call them that) Atletico Madrid celebrated winning the league in 2014. Real Madrid also had a massive year in 2014 winning four trophies including the Champions League.

Of course, this ‘history lesson’ misses out on a lot of other trophies and events but that’s not the main concern here.

You ask yourself golden questions: What happened to people’s perception of La Liga after 2009?

Is this ridiculous dominance from Barcelona, and at one point Real Madrid, a normal thing? 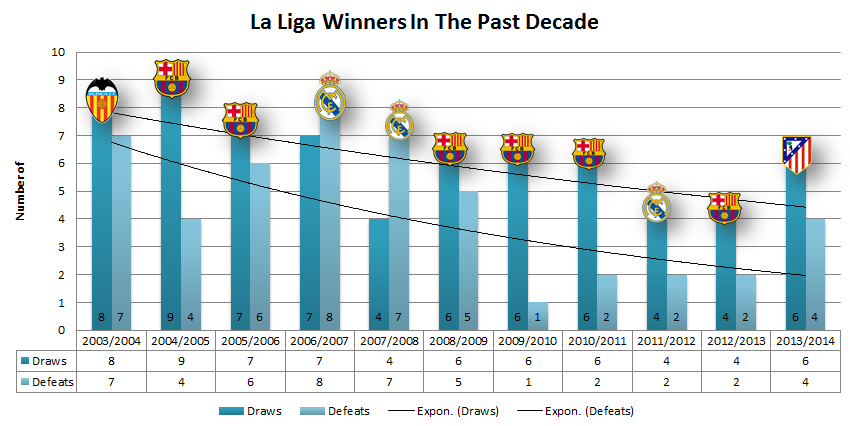 Maybe the word “rise” is not so accurate in this case looking at the above graph.

The graph shows league winners in the past decade and how many draws and defeats they suffered throughout their campaigns.

In the year 2003/2004 Valencia won the league even though they suffered 8 draws and 7 defeats.

The next two years Barcelona won the league but also with a a proper amount of draws and defeats.

Real Madrid actually won the league in the years 2007 and 2008 losing more often than they drew which in itself is another indication of real competition.

In other words, these years were a normal representative of what a league competition is all about. And going back further into history that is mostly what you’ll see.

In 2009, Pep’s team also had a “normal” record of defeats and draws but that year is when things really changed.

La Liga, a league bound to the dominance of Barcelona and Real Madrid, became more of a walk-through than in recent history.

Even in that 2009 league campaign, the draws and defeats were absolutely irrelevant considering that Barcelona had practically already won the league.

In the year 2010, the unimaginable happened. Barcelona finished the season with only one defeat which was against Atletico Madrid.

Similarly, in 2011, Barcelona suffered only 2 defeats the entire season against Hercules and Real Sociedad.

Real Madrid didn’t stay quiet for long either. In 2012, Real Madrid won the league with 4 draws and 2 defeats.

Tito’s Barcelona, with a similar show of dominance, also won the league with 4 draws and 2 defeats.

Finally, in 2014, one of the best things happened in terms of league competition. Atletico Madrid won the league and they did it with 6 draws and 4 defeats.

So, what really happened in these few short years?

Was Tito’s team very confident in the league? Yes.

Of course, a lot could be said when answering the question “why?”

They’re financially on top of the world and more importantly on top of all La Liga teams. But, let’s leave the reasons why their dominance was very visible aside.

Here is the most important part of all.

Such an era or phase in Spanish football’s recent history has influenced the way the world understands La Liga. In other words, winning the league with such records and dominance is not the norm. On the contrary, it is the exception.

The average of defeats from 2003 until 2008 was 6.4 defeats per season. And going back into history you’ll probably witness the same average if not a higher one.
Between 2009 and 2012 this average dropped to 2.5 defeats per season. Such a change can’t be disregarded.
Many fans around the world have lost the essence of what a competition is because of this era. This, of course, does not imply that Barcelona losing or drawing matches is acceptable as such a mentality won’t lead to success. However, getting rid of this illusion that everything should and will go a team’s way throughout a season is essential. Other teams compete, mistakes happen, and tough away grounds have always proven to be difficult.
Atletico won La Liga last season and reminded the fans of what makes a competition great. This season, Real Madrid, arguably the best team in the world right now, have already been defeated 3 times. That is more than any season from 2009(considering that the 2009 end-of-season defeats were irrelevant) until 2012 and one less than Atletico last season. Similarly, Barcelona, Atletico Madrid, Valencia, Sevilla have all suffered 3 defeats as well this season.
Could reality be rushing back into La Liga after years of illusion? I sure hope so.