So, I was thinking of what to do during the World Cup and settled on a kind of predictions game. It’ll be too complicated if it was done game by game so my twitter followers kindly narrowed it down to a couple of simple questions, or for those who find it easier and/or more familiar – a kind of March Madness style bracket. I’ll detail both ways below.

Here’s how it’ll go: you’ll have nine (9) predictions to make. You will get points for each correct prediction and those with the most points win. The predictions are as followed (courtesy of @erMESSIdi on twitter):

1. Predict the team that will rank first in each group. [4 points for each accurate prediction]

2. Predict the team that will rank second in each group. [2 points for each accurate prediction]

3. Predict the eight (8) quarter finalists. [8 points for each accurate predictions]

4. Predict the four (4) semi finalists. [12 points for each accurate prediction.]

In the event of a tie breaker, you must also include:

6. Predict which team will score those most goals.

7. Predict the team that will concede the least goals.

8. Who you think will be the top scorer.

9. The final score in the final.

Each is worth 2 points (unless you guys fight me over it. All these points are arbitrary anyway. I don’t usually do this stuff so guide me, fellow culers)

And no, there is no prediction for third place match because no one remembers third, okay.

So for example, the format could look like this (you can use the full name of the country or FIFA’s 3 letter code):

You choose the teams that will be in each bracket and do the same as above, but via this lovely little wall-chart. The same amount of points will be awarded for the correct predictions of the starting teams as above. The only difference is I took out the round of 16 part for the sake of having a similar point structure as above. (I know you’ll yell at me for this but it takes too much time, man)

Accurate predictions for the semi-final bracket: 12 points each.

Accurate prediction of the winner: 50 points.

The tie breaker remains the same, so you can include them at the bottom of your predictions.

The winner gets to have a post about the subject of their choice written either by me OR they can write the post themselves and I’d post it, after editing it and whatnot. The only caveat here is that you should try to keep the subject football related. As much as I’d love to bang out a 2000 word essay on the plight of penguins in Antarctica, I don’t know about everyone else…

Second place gets a silly post about the subject of their choice or a shorter post about something else (I haven’t really thought about it, open to suggestions).

Third place gets… wait, who are you?

What else should you know?

The cutoff time for all predictions is the kickoff of the opening match on June 12. That means 4 pm EST. It’s short notice but I figure it wouldn’t be fair to start predictions for the whole tournament after a game’s already been played, y’know?

So if you understand all of the above, or don’t but still want to play, have at it! If not, dammit. I’ll do better next time.

Here’s a handy list of all the groups to help you fill out your predictions. 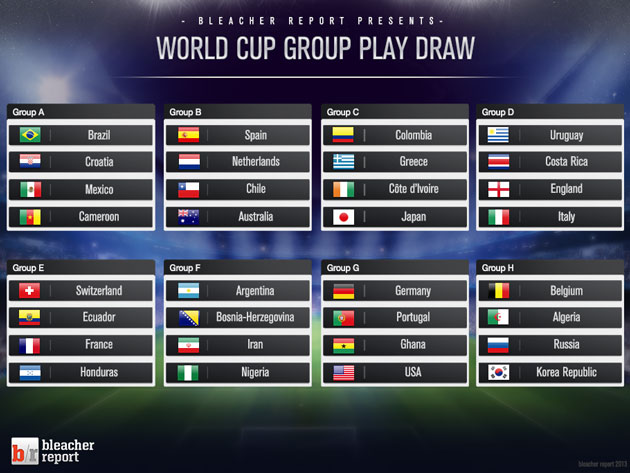