The Return of Tito: PSG – Barça 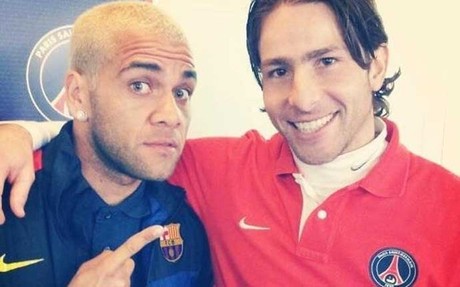 Historical precedence is meaningless between these two sides. The last time they faced, on May 14, 1997, Barcelona’s starting lineup was  Baía, Ferrer, Couto, Abelardo, Sergi, Popescu, Guardiola, Figo, De la Peña, Luis Enrique, and Ronaldo. Amor, Stoichkov, and Pizzi entered as subs. PSG fielded Leonardo, among others. Two years earlier, the squads met in a 2-legged affair that featured Busquets–the other one: Carles.

To compare the meetings would be silly, though it’s likely several of the players remember those matches. Puyol and Xavi had just joined the B team in 1997 and Lionel Messi was a 10-year old who had probably never heard of PSG. Pique was no doubt pantsing someone, probably a 7-year old Bojan. And so, I will not compare the two meetings, unless it’s to mock both the away jerseys worn then and now.

What’s intriguing is that several PSG players played for Barça prior to their current club. Thiago Motta, Zlatan Ibrahimovic, and Maxwell all plied their trade at the Camp Nou. Motta, in fact, spent 2 years in the B team, if you’ve forgotten, before wearing the first team colors for 6 years. He famously returned to the Camp Nou in The Great Busquets Peekaboo Incident of 2010. Ibra got a goal for Milan at the San Siro, while this will be Maxwell’s first return. There have been others who played for both PSG and Barcelona of course, most notably Ronaldinho who made the switch from France to Spain–a full rundown can be found here in Spanish.

This first leg will determine a lot about what Barça’s aspirations for the competition as a whole really are. Can this team, supposedly rejuvenated by their smashing remuntada against Milan, make good on that rekindled hope or will the team that has stuttered around the last few months continue to do so. David Villa mentioned in his press conference that doing so against PSG will earn them a hiding far worse than what Milan put on them. He’s unlikely to be wrong about that given PSG’s attacking strike force, but they haven’t been at their scintillating best either.

Busquets has some great things to say about Ibra, most of which are obviously things I agree with if you’ve ever read anything I ever wrote about Ibra, but the stuff about Beckham was interesting. He anecdotally drops that he was surprised by Beckham’s positioning in a recent match, which shows that he has preconceived notions as well, but not ones that become cemented simply by sitting around in his head. It also shows that he’s watching game tape of his upcoming opponent, which is simply always nice to hear about.

It does strike me as unlikely that Beckham will play tomorrow, though I’ve been surprised before. Denying Barcelona space is the only way to keep them from killing you and Beckham doesn’t strike me as the best defensive option available, despite his potential from set pieces. I admit to not having seen much PSG this year, but they have some serious talent that they can put on the field in very much the same fashion that Madrid has done recently with so much success. Milan too replicated that high double line with a midfielder in between to track Messi, so dynamism up front will have to be the key for Barça as it was in the second leg against Milan.

With Xavi and Jordi Alba both just coming back from injury, there will be added pressure on everyone to perform with discipline. Width will be required, so a decent performance by Tello would be wonderful, but a starting front line of Villa, Messi, and Alexis is likely to be the most dynamic at this point. Pedro’s exclusion would hurt the defensive side of the front 3, but that can sacrificed if Xavi really is 100%. Cesc should also be sacrificed, despite his ability to get into the middle channels. Control and tempo are the most important things and making sure that the team is in rhythm has not been Cesc’s forte so far this season. It’s not that it’s beyond him, it’s that it’s not the role he’s been asked to play up to this point.

With Tito returning to the fold, it will be interesting to see if the speed and verve from the first few months is returning along with the energy. The full squad: Valdés, Pinto, Dani Alves, Piqué, Fàbregas, Xavi, Villa, Iniesta, Alexis, Messi, Thiago, Mascherano, Bartra, Sergio, Jordi Alba, Montoya, Abidal, Song, Tello, Oier,  Deulofeu.

Personally, I’d love to see Abidal all up in that French business, but that seems like too serious a risk to take unless there is an injury. Let him return against Mallorca in the Camp Nou this Saturday. Perhaps I’m only saying that because I want to be there to witness it as I’ll be at work during the PSG match, but whatever, it’s true: let him return at the Camp Nou. Tito will, no doubt, get a massive ovation there as well, which will be just as emotional. Really, I’ll take a return by him no matter how it goes, but I’m trying to be a beggar and a chooser here, okay?

I expect this to be a cagey affair, with a couple of goals nicked at either end, but no resolution to the tie whatsoever. Everything to play for at the Camp Nou. Don’t be fooled by the picture at the top, though, this should also be a tough-tackling affair with several yellow cards. Mourinho is no doubt furious that Wolfgang Stark will somehow call a penalty in the return leg.

Official Prediction: 1-1. Goals by Messi and Lavezzi. Because Argies like to score.