It was a long summer, but the Tito era began as one would have expected: Carles Puyol heading in a 4th minute corner. By the 17th minute it was 3-1 and Real Sociedad was well and truly sunk. It felt familiar in so many ways, of course, but there was a palpable sense of novelty throughout the match as every action was a first. After some point it was just silliness to scream out “That’s the first Mexican wave of the Tito era!” while the Camp Nou denizens demonstrated their absurd boredom.

I was 2 minutes late to the match thanks to an all mighty mix up at my brunch place–the chef thought the mango popsicle they had for dessert was passionfruit! Mrs. The Lady would not stand for it!–and I nearly missed the whole damned thing. But fortunately I was beer in hand when Capi gave poor Ion Ansotegui a nifty little bump that some, including Ansotegui, would call a shove, but which regardless of what you call it left Puyol wide open to use his noggin to hammer in what should have been the match winner. Chori Castro and the somewhat befuddled Barça midfield had something to say about that, though, as they left Real Sociedad back in the match through sloppy play and a very nice finish.

Then Messi decided to make some sort of statement or maybe he just got bored with not scoring goals. It’s hard to say with him sometimes. It doesn’t matter, really, because by the time he was done getting into 2nd gear, it was all over except the final 75 minutes, which were obviously going to be some sort of passing ritual where Xavi was called “imperious”, there was a 10-minute discussion about width, and Pedro was called “spastic”. It was suddenly inevitable yet again that a good La Liga team was going to leave the Camp Nou humbled by the merciless juggernaut of Way More Money Than You.

I was excited to see the match and giggling madly after having checked the Madrid score (“Hay Liga!” a friend cracked), but only Chori Castro’s goal gave the final scoreline a glimmer of potential. The manita, while personally fun because I’m a Barcelona fan, is yet another nail in the coffin of La Liga. It’s not like La Real boasts terrible players by any stretch; it’s not like Sociedad “deserved” to lose 5-0 because they were ambitious and actually had a decent attacking strategy; and it’s not like Barcelona were playing at some high-octane level. Until Iniesta and Villa decided to light up the show (and Sociedad visibly tired), it was just another training exercise in front of considerably more people than usual. Messi was actually pretty crappy, but then again, that’s a relative statement in which he was by far the best player on the field, but somehow didn’t get a six-bagger to his name.

Tello was a live wire, Pedro was a whirling dervish, and Xavi was, yeah you guessed it, imperious. Busquets looked like he was still mentally on la playa de Ibiza; Mascherano wanted to earn 8 cards, but could only manage 1; and Alba had the look of a possessed chipmunk lost in a suburban mall: “Where do I go? Who are all these people? I bet Hot Topic has some interesting new stuff!” and off he speeds through the crowd, finding a ball or an opponent at his feet occasionally, which he would then kick somewhat fiercely. And no, I have not been to a mall in the last 15 years. I have no idea if Hot Topic still exists. But I do know that if it does, it has nothing of interest. None of that is to say that Alba was bad (it’s his first real match for the team and he’s going through some growing pains) and it’s not to say that anyone was bad, which is another way of saying that Barça is so good that a meh, shoulder-shrugging day at the office can be a 5-1 pounding. Which, frankly, is pretty boring.

What’s not boring is this:

Welcome back, Guaje. You were missed as much for your humanity as for your goals. Your teammates resoundingly cheered you on from the bleacher section on Twitter and that was touching. Maybe they were a bit lackadaisical today on the field, but when it came down to it, everyone was hungry for the satiating goodness of goals. And it feels good, no matter how boring the season may turn out to be.

Let’s let this be a season of rejoicing: Guaje is back, Fontas is back, Afellay is back, Thiago will recover shortly, and Abidal may return (the tears are waiting, King Eric). You know what: 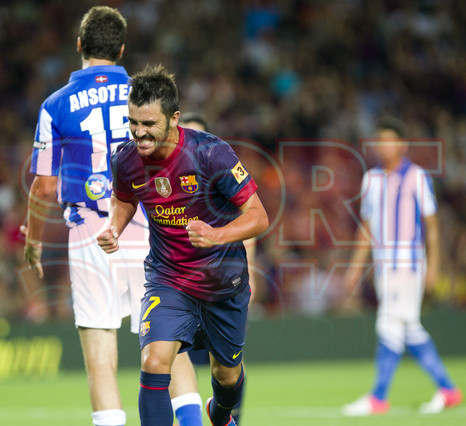 The season is back and it is time to dig in for the long haul.

Images from Eurosport and Sport