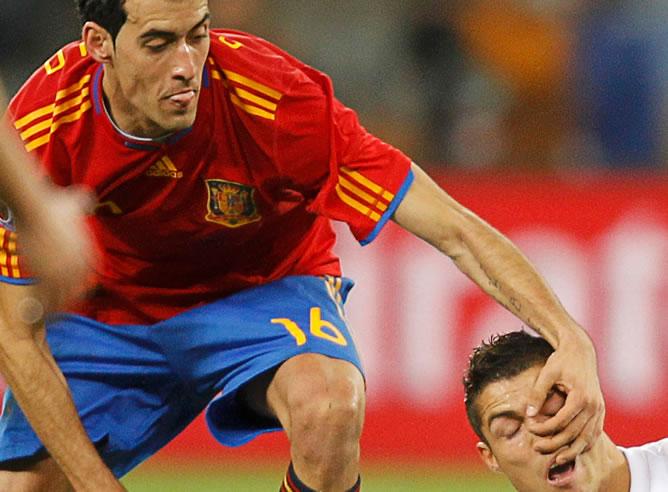 There is one in every team.  A player everyone loves to hate, sometimes including their own fans. They are not afraid to do the unseemly (i.e. embellish) to help the team win and never assume that the other team will play fair. They take matters into their own hands, even if it’s the unpopular way to handle things. Deep down, everyone knows they are one heck of a player and that just makes those critics unhappier.

Sergio Busquets is that player.

“I am not a cheater,” he says simply, in an exclusive, completely fallacious interview with Barcelona Football Blog, “I’m a pragmatist.”

When people think of Sergi Busquets, they think a lot of unpleasant things. A lot of people call you a stinkin’ cheater, amongst other names.

Sergi Busquets: Well, that’s their prerogative to be fair. I can only continue playing football and trying to help my team win as many trophies as possible. Maybe their opinion might change along the way.

Do you believe you act dishonestly to gain an advantage sometimes?

Football is an interesting sport. There are rules and there are guidelines. Some people believe the rules are guidelines and break them with abandon. If someone violently tackles you with no consequences, you could do the same; but then it would become a bloodbath with people trying harder to break legs in retaliation than play the game.

So the alternative, more realistic option is to try to get the attention of the one who enforces the rules and either show or let them know such acts are happening. Maybe the transgressions will stop and the game will be safer to participate in.  If you gotta grab unrelated body parts, roll around a bit, stay on ground long than necessary, scream in fake agony, then so be it. It’s unseemly but you gotta do what you gotta do.

So basically you’re a cheater.

I am not a cheater, I’m a pragmatist. You try to break my face with your elbow, I’ll let the turf hear what I think about it. ‘m not gaining an advantage out of that, more like trying to put a stop to something that shouldn’t be happening in the first place. It’d be great if the referees could see that, but they’re just three people. They won’t see everything so you got to be realistic.

Only a romantic moron would bring ideals to a football match.

What’s that supposed to mean?

Football matches are a lot like a cat fight. In the beginning there are the usual spoken and unspoken rules of engagement (no hair pulling, scratching, etc) but the speed of that going to hell depends on the stakes and how much of a jerk the other is. The higher the stakes and Jerk Factor, the faster the claws come out.

I’m sure all teams would love to win with no dirty tackles, professional fouls, dives and the like, but when there are victories, titles, money and/or football immortality at stake…

That’s a pretty cynical outlook for a person who has Messi on their team.

Look, it would be all well and good if Leo could go through ninety minutes without getting hacked and Iniesta scored every game but it just doesn’t work out that way. No team would ever win a football match, though to witness their utter destruction would be glorious, and in Andres’ case there are hospitals to consider. It’d be difficult to find a place for all those babies.

Two years ago, there was that ‘peek-a-boo’ incident…

…and four years ago I was playing in the third division. Things change, people change. If one incident is enough to give you the reputation of a serial diver, well, that’s just how it is. Never mind that it was a yellow card in the first place.

You seem quite convinced that teams will play dirty against you.

If teams play fair, we beat them nine times out of ten. So that’s not much incentive for them to play fair, is it?

You have to defend yourself if no one is. Take Iniesta. He’s such a sweet guy; eats his ice cream, casually carries his baby in public, and meditates with bears. Underneath all that, though, is a fierce competitor that can punk off the best of ‘em if he has to. Just ask van Bommel.

Do you worry about fans hating you?

Why? It means the fans I do have respect my football and I’ll never have to worry about bandwagoners. I’m okay with having Vincent of the Forest and Pep as my fanboys. It’s the potential hipsters I’m afraid of. [shudders]

And that concludes BFB’s random interview with Busquets.

Stay tuned for the next interview with…

(Sneak peak below as I haven’t thought of anything else and don’t know when I’ll ever post the full thing when I finally sit down to think of it. Reminds me a bit of Villarato Corp.)

Do you have a guilty pleasure with regards to football?

Xavi: You know, sometimes I like to watch truly terrible football matches. Games where there are no tactical innovations, defensive mishaps galore, and a lot of goals.

Excuse me but the irony is too much.

Just hear me out, okay?

Watching a truly sh*t football match is a lot like watching a three-legged dog energetically hobble its way down the street, trying to dodge passersby and obstacles, in order to reach a fire hydrant to relieve itself on. You have much better things to spend your time on than watch this dog. Your brain deserves to be devoted to much better. And yet you stare transfixed at this dog, from the second you first notice it to the moment the last drip falls. It’s inexplicable really. The allure is hard to explain.

(It really is hard to explain.)

(Also, weren’t Busi and Xavi just incredible today?  They deserve their own posts in some way. And what a goal from Messi too. Don’t have time to embed it but it deserves a couple of hours on YouTube. Well, I’m entering Ninja Calvin mode…)