[Note: Written before Rayo game. And sometime after the Getafe snafu]

You see that guy over there? The one with the shaven head who daydreams Bob Marley? That’s our goalkeeper. Lately, he’s been letting balls he’d normally chase go out. Someday, if he’s not careful, someone might score when he’s got his back turned.

But that’s our goalkeeper.

Take a gander at the dude over on the right. No, not your right, my right. Yeah, that guy with the baby curls. He’s our rightback. And winger. Or something. He doesn’t run from deep much anymore. He gets fouled. A lot. Or not, so it’s a good thing he’s got dem carbon fibre shin-pads.

And the man beside him — the one shaped like a beanpole who may or may not smell like Shakira’s latest perfume — that’s one half of our central defense. Sometimes he gets momentarily disoriented and thinks he’s a striker (or maybe he does it on purpose) and he likes his super long, killer balls that end up giving possession back to the other team. Other times he spontaneously bleeds for no apparent reason.

The Tarzan caveman-like individual screaming at him? That’s our captain. No, actually, the one with the buck teeth is Argentina’s captain. Well, former captain. In any case, a good 70+ % of Earth may be covered by water, but the rest is covered by them.  They both eat nails for their breakfast. Go near them and they’ll slide tackle you like you wouldn’t believe. While getting all ball. Just because. Sometimes they’re so crazed with passion, they read I, Zlatan. On weekdays. Just to stay motivated.

You know who else stays motivated? The King of Kings. No, his name is not Joffrey. He’s a cancer survivor. He kicked it’s, and H1N1’s, butt. And manned a flank in a Champions League final. Sure, he’s a bit iffy sometimes, but he’s still awesome.

You see the man over there? Yep, the one with the Bambi legs. That’s our defensive midfielder. Well, one of two. Maybe three. Anyway, he’s a little (or tall, whatever) punk. The Earth’s gravitational pull tends to be stronger whenever he loses the ball and he tippy tappies, err, tiki takas, his way everywhere instead of crashing that box. Sure, it’s not really his job, but if he wants to get an A, he has to exceed expectations and standards and all that jazz. And he’s a punk.

…Who? Oh, you mean him? That’s our cerebral dictator. He has chameleon eyes. Or was it kaleidoscope. Well, he’s got both. And a cowlick. That means that our attack goes through him too much. Sometimes. I know, right? How can something occasionally detrimental be so good?

The bro with the lost look on his face? Our all-purpose player. You know, like all-purpose flour except football specific. No-one’s really sure what exactly he brings to the table (except real buffs like Jonathan Wilson) and he has this look on his face like he just saw someone body slam a seal. Or something.

The fearless boy with major swag? This year’s wunderkid. Great, ain’t he? Sure, he’s still a bit rough around the edges — a legend in progress — but by God is he good.

And I could say the same for the rest of our midfield.

Ah, the gelled up hombre is our striker, left wing, part time defender man. He got infected with a Bojanglesesque confidence crisis and is in a bit of a rut. His emo hair gives him magical anti-offside powers, but it was deemed too unpredictable by the Spanish FA, so he’s not allowed to style it like that anymore. A pity.

The dude in the middle is our best player. He’s perfect. Except when he’s tired, then he’s just perfectly flawless.

…Nope. That’s not a Cabbage Patch Kid. He’s one half, or third depending on your view, of our new signings. He’s a bit tentative, like the new kid that just moved in and wants to be your friend. Slipping is his favoured move of late, but he’ll come good eventually.

As our offense always does.

On the touchline is our mister. The boss, the p*to jefe, the Coldplay diehard*. He sometimes has too much belief in his players, and starts weird lineups, and gesticulates a lot. Pepsimism is his favorite state of being most of the time in press conferences (unless he has to attack his arch rival, in which case beast mode is turned on).

*Michael Jackson in his younger days.

Sometimes we Hleb others.

Other times we’ve been Hlebbed. 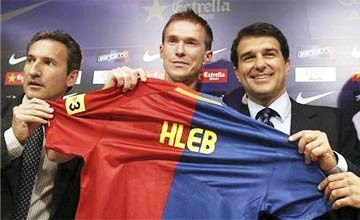 Sure, they’re not perfect, but I love ‘em anyway.