Let’s talk about the B-team

As you know, our B-team, which is affectionately called ‘The Barca Babies’ around here and probably anywhere of importance, is playing the Segunda division. That means the same place as the once SuperDepor and giant killing Alcorcon.

Last season, they finished third in the standings which would have meant they could have been promoted had it not been for the first team also playing there.

We (read: myself and readers blitzen, Miguel, jordi, and Jnice) wrote up a scouting report at the end of the season, which you should read before continuing. And if you’ve read it, read it again.

Enter Eusebio in place of Luis ‘Lucho’ Enrique (now at Roma) and Kiko Femenia and Rodri in place of Nolito (sold to Benfica) and Jonathan Soriano (long term injury).

Let’s talk about the good things

-If I had to pick four players who have been the most consistent I’d say Bartra, JDS, Montoya and Sergi Roberto. When talking about experienced players, it’s those four who have been the calmest under pressure and have been trying to lead the team out of the rut it’s been in. (More on that later).

Our promoted Juvenil A players: Rafinha, Espinosa, Sergi Gomez, and Deulofeu also known to me as God Made Him (In Catalan, ‘Deu’ means God, ‘lo feu’ means ‘made him’. Put together Deu + lo feu = Deulofeu or God Made Him).

Those four players have adapted quite well to the Segunda division. They obviously have a lot to learn, but it is very heartening to see they aren’t intimidated by the jump from the under-19s (Juvenil A) to the Segunda.

To talk about them individually:

Sergi Gomez: still has to get a hang of Segunda forwards, but given time, he can improve, especially if Bartra is the one to partner him in defence. His height is a huge asset and his positioning is superb.

Rafinha: although he’s been playing out of position, he still shines. Not as brightly as he could, but more probably more than he should given where he’s been playing. Like Thiago, he’s got this Brazilian flair. Seeing him dribble is really something. His set piece moves with Sergi Roberto and JDS have been stuff to behold even though they rarely come off.

Espinosa: simply put, there isn’t another player like him in the team. Personally, his style reminds me of Iniesta, very smooth as he weaves his way past players. As a player who can ‘play between the lines’, he’s crucial to creativity in the midfield (alongside JDS and Sergi Roberto). Although, he still has a long way to go, so no need to hype him more than necessary.

Deulofeu: speaking of hype, we should also be careful with this one– it’s easy to get carried away when talking about God Made Him. That being said, this season, his selfishness has toned down a lot; he’s passing more and making space for his teammates instead of dribbling into trouble. When he comes on, he’s usually the go-to man offensively. It’s quite amazing to see him make fools out of seasoned defenders, though the same can be said for Rafinha. To put the above into perspective, he recently got a standing ovation away from home in the 1-0 win against Huesca.

Let’s talk about the bad things

– Those wins came off a seven match winless streak during which the team either: a) fell behind and could not score, b) scored but tried to hold on for the win and failed, or c) where they did b) and then a).

– We were in the relegation zone after eight games. Now, we sit in 15th place after 10 games. (This is good news).

– If you have never seen Armando and Carmona play, you have been spared of a truly traumatic experience.

Carmona basically thinks he’s Messi. He’s hulky and slow, with blocks of concrete for feet, but feels the need to constantly dribble instead of passing. He tries to take control of the situation, as ‘the experienced forward’, but ends up just making things worse.

Armando is just…bad. Really, really bad. He is slow, gives the ball away cheaply in dangerous positions, and get beaten by players with regularity. Which wouldn’t be so bad if he wasn’t a defender.

I don’t know what is with the B-team and useless twentysomethings.

(Players like Nolito and Jonathan Soriano are exceptions to the rule (which consists of Saul, Benja, Carmona… #&@^! hell.)

Levante were the ones who gave Armando hope of a professional career in football and were the stepping stones to propel him towards us via FC Cartagena. Those evil table topping b*stards.

– The injury to Jonathan Soriano has been pretty crushing for our offense. Although it’s still probably too early to say, Rodri, the new 9 to ‘replace’ him, just isn’t cutting it. He’s having a hard time getting settled. The same goes for Kiko, who hasn’t been bad, but hasn’t been setting the world alight either.

(Tello is another player who, while still a danger, is missing that  special sense that tell one when to shoot and when to pass to another player. He’s not that bad though, so perhaps I’m being a bit harsh on him).

– We score a goal, but can’t score a second or hang on. We concede a goal then another and then another… Yes! We get one back! Remuntada, baby–ah. Armando slipped. We concede another goal. Never mind. 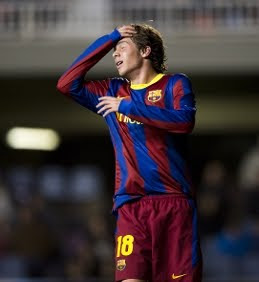 Let’s talk about Eusebio and… oh hell no.

Which is within his right to do, I guess, since they are available players (damn).

The problem lies with him. And his tactics. More accurately, the lack thereof.

I’m not a Jonathan Wilson, Zonal Marking, Euler-esque tactician, so there is something very, very wrong when I can see the problems with the team and the head coach can’t.

What’s happening is that Eusebio starts an initial lineup which is set up to fail (like playing players out of position or starting Armando in the center of defense as the ‘leader’ alongside rookie Sergi Gomez) then throws on the kids, usually Deulofeu or Espinosa, and Carmona to put out a self-created fire.

The kids and Carmona.

And by the time he throws on the kids and Carmona, there isn’t enough time for them to fix anything. Because they were thrown on fifteen minutes too late. Or not all all.

Eusebio is a former player of ours, which is why he was given the job probably (following the examples of Pep and Lucho), but this could be a mistake.It should also be noted that Eusebio was head coach of Celta Vigo, another former club of his, for the 2009/10 season and almost got them relegated (he was subsequently fired) so it’s not like his track record is the greatest…

He’s basically killing the development of promising teenagers for the sake of his job, the job whose premier objective is to help develop the very kids he’s benching in favour of new signings (Kiko and Rodri), Carmona, and Armando.

Let me repeat that: Eusebio…benching promising kids… for… Carmona and Armando.

There was a time where we couldn’t hold onto a lead. To the point where squad (self-) confidence was seriously in danger of being destroyed. Like, seriously.

Will that stop them, Pep? I doubt it.

The B-team is meant to be a place where players from our youth level teams come in and develop. Because our team is awesome and has made its way into the Segunda, players with ‘experience’ are added into the team to provide leadership and, uh, experience to the younger, inexperienced kids. Good idea, right?

Yeah, I thought so too. I don’t think Eusebio does though. The attitude he seems to have towards this B-team is this win at all cost, experience first mentality, one that is not working.

‘We should give him time because it’s still too early to tell’, ‘let’s not make any hasty decisions’, ‘we’ll improve’.

The above has been repeated ad nauseam, but I really honestly believe that he doesn’t understand why things aren’t working at a fundamental level. Which is a pretty damning misgiving to have.

No one is expecting the B-team to come anywhere close to where they were last season, but they shouldn’t been in danger of being relegated.

The frustrating part is that Eusebio actually has all the tools to do very, very well in the Segunda; he’s just doesn’t understand how to use them properly, or at all.

It’s like giving someone all the land and materials they need to build a mansion only for them to throw a shack together — a shack that’s about to fall apart at that.

Yo, Pep, I don’t think they’ll be talking about this on the radio. Or on TV.

Because they haven’t been broadcasting the Babies’ games. It’s been two weeks since I’ve seen Eusebio in his hipster jeans, looking all worried and feebly gesticulating things on the touchline.

The B-team has won both matches since the ending of the broadcasting.

This is unfair. I say we launch an Occupy!Eusebio campaign.

…Wait, did I do that right?

Let’s tell it how it is, and how it could be

Well, you know how it is. As for what it could be, my gut instinct says that if we had Juvenil A coach Oscar Garcia — the same Oscar Garcia who lead a Juvenil A which featured Gomez, Rafinha, God Made Him and Espinosa to the treble last season– take over, we’d be comfortably in the top 10.

In other news, I will be temporarily off BFB for a while starting November 1st.  Try not to miss me too much. 😛

If you’re interested in being a back-up to Calvin Liveblogger while I’m gone, leave a comment below.

In totally random news, cleverbot.com is the best time-wasting site ever.

(All pictures print screen’d by me).