He wasn’t going to make it, they said. As much as we’d love him to, as proud as we’d be if he overcame the odds, he just wasn’t good enough.

Sitting in a bar, or cafe, or even in the living room, the main talking point during the summer transfer window always remained the same: the team needed another goalkeeper.

“His feet are too shaky!” one exclaimed to their seat neighbour. “s’like he’s got lead in his boots. Or bugs down his pants…”

“He always gets beaten at his near post. It’s so irritating!” another griped. “And he can’t command his area to save his life!”

“Our team would be unbeatable if we had a world class goalkeeper.”

The rest could only sigh and nod their heads, raising their glasses in a general sign of agreement. The ‘here, here!’ went without saying.

The team was incredible upfront — a Ronaldinho in his prime, Samuel Eto’o scoring goals like a madman, and the impish Ludovic Giuly bombing down the flanks; not to mention a shaggy haired wonderboy coming through the ranks, one Leo Messi — the midfield contained the mercurial Deco, the cerebral dictator Xavi, hardman (ahem) Mark van Bommel; and yet another golden boy ready to replace anyone if need, the one who was going to retire both Xavi and Pep: Andres Iniesta. Carles Puyol and Rafael Marquez had a strong accord, with the Brazilian Juliano Belletti at right back and Dutch left back Giovanni von Bronckhorst completing the defense. Good lineup all the way around, if they would say so themselves. They could just pretend Oleguer didn’t exist.

…And he’s not very good.

That was the general consensus.

Real Madrid had Iker Casillas come through their ranks, so naturally cules wanted a rebuttle, a counter argument; someone they could serve up as example that was just as good. W-well, we have an amazing goalkeeper from our youth teams too!

Like fine wine, they believed, he’ll get better with time.

Or rather, they hoped.

Sometimes, they weren’t so sure. Even when he won the Zamora trophy at the end of the 2003/2004 La Liga season, some felt it was due to the defense in front of him. After all, a goalkeeper is only as good as his defense. And their defense was amazing.

It wasn’t hard to poke logic sized holes into that reasoning.

And he was going to make it.

So when May 17, 2006 arrived, the long anticipated Champions League Final between Arsenal and Barcelona, it might as well have been D-Day. The Gunners were coming into the final with a record number of clean sheets, the Boy Who Left was starting in the midfield, and most terrifying of all*: one Thierry Henry upfront. Ready and firing.

Just make sure the ball doesn’t get near Valdes and we got this. If the team followed that simple rule, the CL trophy would be going back to Barcelona.

A minute in, and Thierry Henry was through on goal, had only Valdes to beat. Cules feared the worst. They covered their eyes. Damn, we’re 1-0 down. Already!

Except they weren’t. Valdes stopped him from point-blank range.

In case some people didn’t see it the first time, Valdes then stopped Henry again. From point-blank range. Again.

Valdes had made two crucial saves within the first three minutes to keep the game scoreless. It started to look up. After 18 minutes, Barcelona were up a man after Arsenal goalkeeper Jens Lehmann was sent off for a foul on Eto’o — until they went down in the score board 19 minutes later, Sol Campbell heading in freekick. 1-0 to the Arsenal at half-time.

Second half started and after some good chances, Henry was put through on goal by Alexander Hleb. (Note: that was not a typo). Only had Valdes to beat. Again. Surely he would score this time. 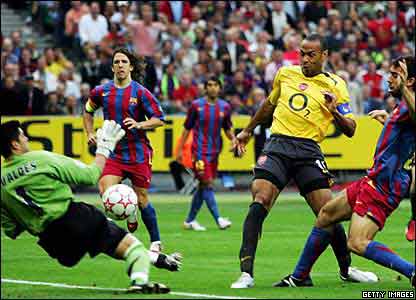 Then Eto’o scored after a pass from Swedish legend Henrik Larsson, the supersub, and the score was tied 1-1. And then Belletti scored that goal after another pass from that man Larsson. 2-1.

And then Barca won its second CL trophy.

After the game, what did then-coach Frank Rijkaard have to say?

Valdes played a decisive role. He saved us at crucial moments.

And no-one disagreed with him.

Without the final in Paris [in 2006], I wouldn’t play at Barça anymore. That was my key game, my most important night as player

— Victor Valdes, a couple of days ago.

And it was that night that cules realized hey, we might just have a goalkeeper after all…

Fast forward five years, three Zamoras later, and many people are wondering why Victor Valdes can’t get a game for Spain.

“His feet are incredible for a goalkeeper!” one says to their neighbour. “It’s like he’s another outfield player!”

“His reflexes are amazing!” another booms. “Not to mention he almost never gets beaten one-on-one.”

“World class. The guy is world class. Would be starting for any other national team, for sure.”

The rest could only sigh and nod their heads, raising their glasses in a general sign of agreement.

The ‘here, here’ went without saying.

So when Victor Valdes steps onto the pitch at 12pm EST on Saturday, he will overtake former starting goalkeeper and current sporting director Andoni Zubizarreta as the goalkeeper with the most appearances for Barca with 411.

He made it alright. And now he’s making history.

Who woulda thunk it?

We salute you, Victor.

Carles Puyol, Ibrahim Afellay, Adriano, and Maxwell have all been given the green light. They are in the 20 man squad travelling to Sociedad.

*You guys don’t know how much I wanted to write:

“[…]and most terrifying of all: Alexander Hleb was starting.”

By the way, whatever happened to Oleguer? Last I heard of him, Ajax was paying for his, uh, services.